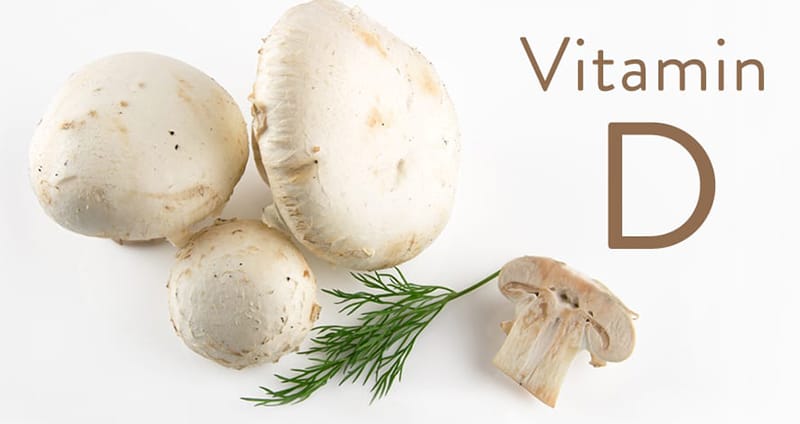 In this article, we will explain in depth how the human body processes sunlight into vitamin D and uses it to maintain its proper function. We’ll also analyze which populations have deficiency issues, why supplementation is of utmost importance, and finally, we will talk about how to find the best plant-based source of vegan vitamin D to optimize your health.

Did you know most sources of supplemented vitamin D come from lanolin, a wax found on sheep’s wool?

If you follow a plant-based diet, this might be something you want to avoid. To solve this dilemma, Real Mushrooms has created a vegan vitamin D out of, yup you guessed it, MUSHROOMS. This article will shine a light on everything you need to know. 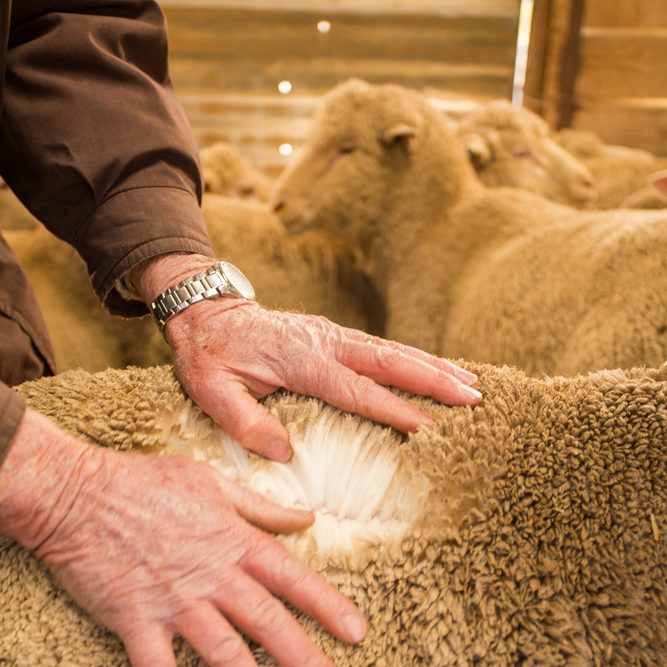 Most vitamin D supplements are synthesized from the Lanolin of sheep’s wool.

The human body requires many nutrients to run optimally every single day; some of these nutrients the body can miraculously produce on its own (non-essential), others need to be obtained from the diet (essential).

Essential nutrients are ones that cannot be synthesized by the body and, therefore, must be supplied from foods.

Since we get most of our vitamin D from the sun, most North Americans who experience the winter season are at risk for deficiency in vitamin D. During winter, the Northern Hemisphere leans away from the sun, there are fewer daylight hours, and the sun hits us at an angle; this makes it appear lower in the sky. This also means that the sun rays hitting the earth are not as strong, therefore we don’t have sufficient sun exposure to get the necessary amount of vitamin D from UV rays (ultraviolet radiation).

Vitamin D is a fat-soluble vitamin that helps your body absorb calcium and phosphorus. It appears in small quantities in a few foods such as oily fish, egg yolks, cheese, fortified cereals. But, it generally needs to be taken as a supplement, especially for those living in less sunny regions.

How the Body Gets Vitamin D

It’s really quite amazing, how the human body can translate sunlight into energy; here’s how it works: ultraviolet light stimulates the production of cholecalciferol (a precursor), which the body absorbs from the skin and eventually transforms into active vitamin D3. Vitamin D obtained from sun exposure, food, and supplements is inactive when first presented in the body, so it must undergo two chemical processes for its activation.

Both Vitamin D2 and D3 are formed through ultraviolet exposure of precursors: ergosterol for D2, and 7-dehydrocholesterol for D3. It is true that most forms of D3 are animal-based. The available non-animal forms (yeast, mushrooms) are actually based on the fungus kingdom and are primarily D2 [2]. There is lichen-based D3 which is derived from an edible lichen (a complex life form made from a fungus and alga).

As you can see, the sun is a vital resource that maintains our health. We are continuously discovering how connected humans are to mother nature, and how the fungi kingdom is a key player in this interconnected web called life. As we work harmoniously with the earth, we are co-creating a sustainable planet for future generations. Now that you’re aware of our human requirement for vitamin D and how it’s synthesized, we’re going to discuss the sources being sold on the market.

Most of the vitamin D is sold to us in its D3 form, and it’s primarily made from irradiating sheep lanolin (a wax secreted by the sebaceous glands of wool-bearing animals). This may seem unattractive to some vegans out there that do not consume or use animal products. It also begs the question: are these highly processed in a mass production facility? What are the ethics and morals behind these agricultural farming practices? How were the animals treated?

It’s important to question everything and to trace back to the source of where your food and supplements come from. Quality and sourcing are everything when it comes to the health of your body, mind, and spirit.

About 1 billion people worldwide have a Vitamin D deficiency [5]. We understand the urgency for the population to get their bodies back up to healthy levels, that’s why we’re thrilled to bring you vegan vitamin D that is made purely from the highest quality mushrooms. While many “mushroom” products sold on the market are just myceliated grain and do not contain any actual mushroom (fruiting body), our mushroom extracts are free from grains and fillers, and we use the whole mushroom which contains many highly medicinal compounds such as beta-glucans (a polysaccharide found in the cell wall of mushrooms). When using analytical testing methods to determine fungal content, ergosterol is measured; ergosterol is highest in mushrooms. It is a definitive marker for fungal presence and has been utilized for years by the grain industry as a test for fungal contamination.

Our whole-food, plant-based source of vitamin D is potent; we use 100% organic Agaricus and Shiitake mushroom for our capsules and each one contains 1000 IU of vitamin D2. It is recommended to take 1 capsule per day over a prolonged period of time.

Recent work from the Vitamin D, Skin, and Bone Research Laboratory at Boston University Medical Center evaluated a newer food source of Vitamin D – mushrooms exposed to UVB light, which provide a significant source of D2. In this study, it was determined that healthy adults who ingested 2000 IUs of Vitamin D2 from mushrooms daily for 3 months were able to raise and maintain their total 25(OH)D concentrations similarly to healthy adults who ingested supplements containing either 2000 IU of Vitamin D2 or D3. This study suggests that Vitamin D2 is equally able to help consumers meet their Vitamin D shortfall as Vitamin D3. 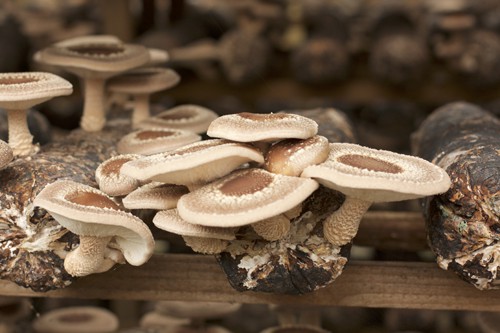 Irradiated mushrooms are one of the few nature sources rich in vitamin D. These organic shiitake mushrooms form the basis of our vegan Vitamin D2 supplement.

Ultraviolet exposure during the growing phase is essential to getting vitamin D from mushrooms. This is an important point that many articles touting mushrooms for vitamin D leave out. Without some sort of UV light exposure, most mushrooms have almost no vitamin D. For example, the common button mushroom has roughly 7IU of vitamin D per 100 grams which is nothing to celebrate.

But mushrooms have this incredible ability to absorb sunlight and convert it into vitamin D2. Small amounts of Vitamin D2 are found in wild mushrooms[2]. However, D2 levels can be amplified with ultraviolet light exposure. Ergosterol (which is a fungal sterol similar to cholesterol in humans) needs to be converted into ergocalciferol (D2), and this is done by exposing cultivated mushrooms to UV light.

One study showed that vitamin D2 levels can be increased in any variety of mushrooms by exposing them to pulsed UV light. With each additional pulse, the mushrooms were exposed to increasing amounts of irradiation and thus more energy was available for Vitamin D2 synthesis. The oyster and shiitake showed higher amounts of Vitamin D2 content after pulsed UV light exposure than other mushrooms tested [6].

The more mushrooms are exposed to UV light, the higher their concentrations of Vitamin D.

What is the Difference Between Vitamin D3 and Vitamin D2?

There has been some debate on whether vitamin D3 is more effective than D2, and so far there is a lack of clarity in the literature defining any differences in effect [4]. The two forms have traditionally been regarded as equivalent based on their ability to cure rickets (a skeletal disorder that is caused by a lack of vitamin D, calcium, or phosphate). Most steps involved in the metabolism and actions of vitamin D2 and vitamin D3 are identical. Both forms can raise serum 25(OH)D levels [1].

Vitamin D expert, Medical Doctor, Author and Researcher Dr. Michael Hollick, uses a synthetic Vitamin D2 form in his clinic and suggests it is as efficient as Vitamin D3. He did mention that you have to get a good quality, and source, and dose. Through Dr. Hollick’s historical research on Vitamin D, he found that Vitamin D2 was a major breakthrough in the treatment of rickets. rickets treatment. Then there were some research publications suggesting that D2 intake may decrease construction of Vitamin D3. Dr Hollick suggests these studies dismantled the future use of Vitamin D2 for therapeutic purposes without substantiated evidence. He then went on to do his own research around Vitamin D to learn more. He has done 3 studies around Vitamin D2 and Vitamin D status. He confirmed that the kidneys are able to convert Vitamin D2 to the active form of Vitamin D.

One difference between vitamin D2 and D3 worth mentioning is the duration of its action in the body. When vitamin D3 is given at a high dose, it appears to maintain serum 25(OH)D concentrations for a longer period of time compared to a high dose of vitamin D2. However, the difference in effect was lost with daily supplementation.

That is, one high dose of Vitamin D3 may remain in your system longer than one of Vitamin D2. BUT, there is no significant difference between D2 and D3 supplementation in raising serum 25(OH)D levels when taken daily, as opposed to taking a single high dose. Discrepancies between clinical studies highlight the need for more information on the physiological influences of vitamin D as a whole.

As for now, rest assured that you can supplement your vitamin D2 from an environmentally friendly and humane option: mushrooms! This is great news for vegans. The mysterious and miraculous mushroom comes to save the day, yet again!

Taking mushroom extracts will help us sustain our Vitamin D2 levels. In general, mushroom benefits for health are numerous, so we also want to highlight other supportive compounds your body will receive as a bonus!

The great thing about medicinal mushrooms is that they are amazing allies for your immune system. The common threads between all medicinal varieties are their ability to a) support immunity, and b) help fight inflammation.

We’re truly on the precipice of global change; each one of us has the ability to make decisions that will greatly impact our health and the earth. Our vegan vitamin D supplement made from 100% organic mushrooms is sure to make your cells dance in celebration, after all, humans have evolved alongside fungi for thousands of years!

If you’re looking for even more immune system support on top of your vitamin D intake, consider taking our D2Z mushroom supplement which contains zinc in addition to vegan vitamin D.

Real Mushrooms’ products have the purest and most potent concentrations of mushrooms. We use only 100% mushrooms (fruiting bodies), so rest assured that no grain or fillers end up in your supplement.

Learn more about how to spot fungi supplements that contain little to no mushrooms at all, and are in fact, mostly grain. Becoming informed about the contents and sources of any health supplement you are considering purchasing is crucial to getting effective health support.

Fun Fact: You can enhance your store-bought mushrooms’ vitamin D levels by slicing them and putting them out in the sun for 20 minutes! Real Mushrooms is the premier provider of organic mushroom extracts, verified for the beneficial medicinal compounds like beta-glucans and free from starchy fillers like grains. With over 40 years of mushroom growing experience, Real Mushrooms prides itself on providing a transparent source of medicinal mushrooms that you can trust.