What Trees Does Chaga Grow On? 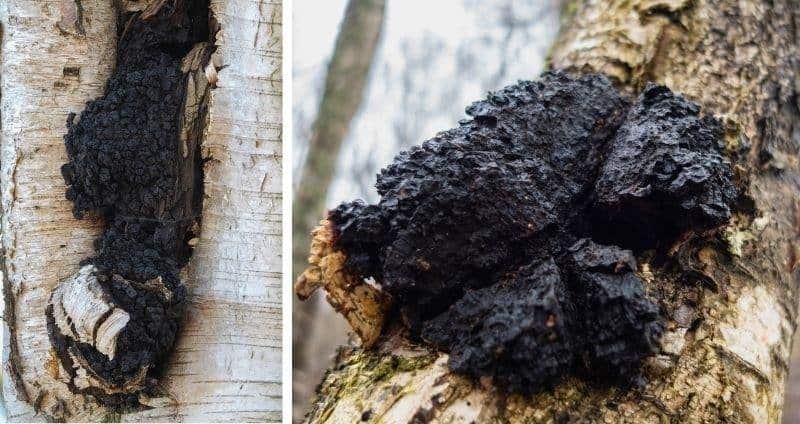 Chaga is an adaptogenic fungus that can have excellent health benefits for the skin and body. It is not an actual mushroom. It is a parasite that grows on certain hardwood trees and it looks like a black, lumpy wood knot. What trees does chaga grow on? Read on below to learn more about this health-boosting fungus and where to find it!

A Quick Primer on Chaga

As a parasite, I. obliquus has a one-sided relationship with its host tree. Its enzymes cause the simultaneous decay of cellulose, hemicellulose, and lignin (the three main biological constituents that make up the wood of trees) from the heartwood of its living host. The breakdown of the heartwood weakens the tree’s infrastructure, allowing for the first traces of what we call “chaga” to protrude from within the tree.

Chaga can be considered a sterile conk or canker that forms on hardwood trees. This dark conk consists primarily of wood lignans and mycelium (the fibers that can be thought of as the fungal root structure).

Some call chaga a sclerotium but as it is not pure mycelium, like what is produced by Poria (Wolfiporia extensa), Polyporus (Polyporus umbellatus) or the Tiger Milk mushroom (Lignosus rhinocerus), this would be an incorrect characterization. In fact, one paper estimated chaga to be only around 10% mycelium (4).

Where Does Chaga Grow?

Chaga can be found in northern regions. Canada, Russia, Siberia, northeast China, and northern areas of Europe and the United States are areas where chaga grows.

Making tea from chaga is a traditional remedy and coffee substitute in these northern regions.

Finland is a country where chaga grows abundantly. It is one of the first countries to try and inoculate birch trees to encourage the growth of this fungus for chaga harvesting.

What Trees Does Chaga Grow On?

Geographically, I. obliquus grows on trunks of a variety of hardwood trees in cold habitats (45°N to 50°N) of North America, Eastern Europe, and Asia.

While chaga grows most commonly on birch trees, other species of trees commonly infected include (1):

Chaga grows very slowly on its host, and it can exceed 50 cm in diameter on old trees after many years (2).

The decay of the heartwood can last for another 30 to 80 years, although chaga can be harvested after 3-5 years of growth. When the host tree or a part of it dies, the actual mushroom (fruiting body) of chaga can appear.

In the first stage of chaga growth, its spores have penetrated the birch tree, germinated, and have begun to consume the heartwood.

In the second stage of growth, the fungus will then push toward the exterior of the tree consuming the wood as it goes.

In its third stage of growth, the fungus will break through the bark and begin to form the canker of mycelium and wood lignins we call “chaga.”

Over many years, the chaga grows much bigger and darker. It largely contains wood fiber & lignin which house many of the nutrients found in the host tree.

For example, chaga that grows on birch trees will contain betulinic acid and its precursor, betulin. These triterpenes (natural plant compounds) have potent antioxidant, anti-ulcer, anti-gastritis, and immunomodulatory effects (3).

Knowing what trees chaga grows on will help you locate and identify it. When you find this “black gold” fungus, you can then harvest part of it to make your own health-boosting chaga tea!

For more information on the health benefits of chaga, read our article, Chaga Mushroom Benefits: A Science, Health, & Supplement Guide.