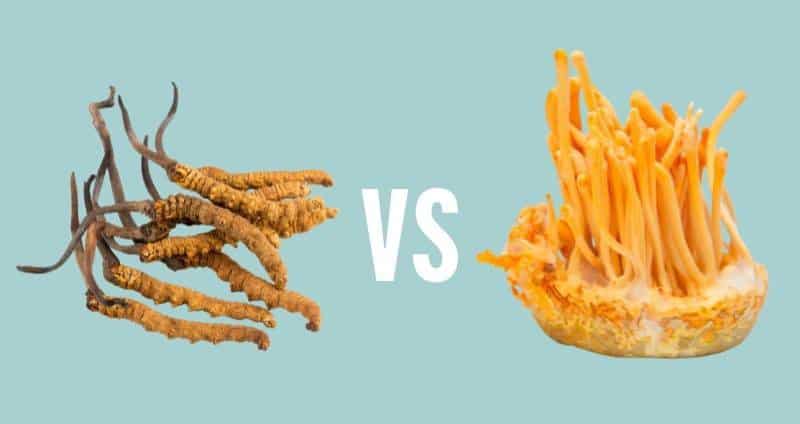 There’s a fascinating mushroom that grows from insect bodies after it consumes them from the inside out. This parasitic fungus is called Cordyceps. Ironically, what is deadly to insects becomes something that is healthy for humans to consume as a multi-benefit supplement. There are key differences between the commercially-available Cordyceps types used in supplements. So, the question is: when it comes to Cordyceps sinensis vs militaris, which variety gives you the most health benefits for your buck?

Cordyceps sinensis is a type of health-supporting, functional mushroom that has been used for centuries in Traditional Chinese medicine. In modern times it has become so rare and highly sought after for its unique health-supporting properties that its price tag makes purchasing it out of reach for all but the ultra-rich.

Read on to learn more about the difference between Cordyceps sinensis vs militaris and which of these two mushrooms makes for the best Cordyceps supplement. This unique mushroom is worthy of exploring for the number of health benefits it can provide. However, the supplement industry can be misleading about what you’re getting, so this guide will help inform you about what to look for.

The information in this article has been reviewed by Dr. Mason Bresett, Chief Science Advisor and Naturopathic Doctor.

What Are Cordyceps Mushrooms?

Each of the 400+ species of Cordyceps is fundamentally a parasite that will grow on a very specific insect unique to it. We will be examining just two of these species: Cordyceps sinensis (now known as Ophiocordyceps sinensis), and Cordyceps militaris.

The most well-known and common species of Cordyceps mushrooms is Ophiocordyceps sinensis. Previously known as Cordyceps sinensis, it enters and grows from the caterpillar of the Hepialus moth. When found in the wild, the mushroom will be above the ground’s surface with the body of the insect below.

The Cordyceps sinensis species of Cordyceps is very rare in the wild because of the lifecycle of the fungus and specific environmental growing conditions necessary for it to thrive. It mainly grows at high elevations in Tibet and the Chinese provinces of Sichuan, Yunnan, Qinghai and Gansu. It can also be found in India, Nepal, and Bhutan, but is less abundant there. In Tibet, the mushroom is known as Yarsagumba or yartsa gunbu and in China it is known as Dōnɡ Chónɡ Xià Cǎo (冬虫夏草), which translate to summer grass, winter worm.

The Price of Cordyceps Sinensis, A.K.A Himalayan Gold

Cordyceps sinensis is relatively rare to find naturally and grows only in these limited regions. This scarcity of the wild variety of Cordyceps sinensis and its desirable health-promoting traits results in a high price tag (around $20,000 per kilogram). Therefore, these fungi are not typically in any supplement you can readily purchase..

Due to the rapid rise in price on this precious resource, it has been dubbed “Himilayan gold.” It has become a significant contributor to household income in the harvesting regions, so much so that there have been disputes over harvesting territory, and outsiders have tried to push their way in. There are now harvesting permits being issued by the Chinese government and local land holders for access to the growing regions. For more on Cordyceps sinensis harvesting and the lifestyle in Tibet, see Daniel Winkler’s article in Fungi Magazine.

More recently, concerns over the sustainability of Cordyceps sinensis have been raised around overharvesting, ecosystem degradation and climate change (1).

Cordyceps Sinensis and the Chinese Runners

This is an entire article in itself but it needs a brief mention.

Cordyceps sinensis made international headlines in 1993 at the Chinese national games in Beijing, when multiple Chinese runners shattered track and field records.

Most notable was Wang Jungxia, who beat the 10,000m world record by 42 seconds. This record lasted for 23 years.

Three days later, she came second to teammate Yunxia Qu in the 1500m. They both beat the previous world record, and Yunxia’s record stood for 22 years.

Two days after that, Wang posted a world record in the 3000m. This record still stands today, and four of the five best times in the 3000m come from Chinese athletes in these 1993 games.

Their coach, Ma Junren, claimed their success was due to a tonic of Cordyceps sinensis and turtle blood.

This Olympic runner’s story is touted all around the internet to promote Cordyceps products, but what is typically left out is that many of Ma’s athletes later failed drug tests. Because of this, Ma Junren was eventually dropped as part of the Chinese Olympic team.

This era of sports in the 80s to mid-90s was rife with doping scandals, and it begs the question: was their success really due to Cordyceps?

Even though the majority of Cordyceps supplements do not contain the caterpillar fungus, this has not stopped many companies from using photos of Cordyceps sinensis in their marketing materials and label information. This has caused customers to believe they are consuming this mushroom. Sadly, they are not.

But if the caterpillar fungus (Cordyceps sinensis) isn’t in your supplements, then WHAT is?

There is currently one type of Cordyceps species that can be commercially cultivated at scale to produce a mushroom (fruiting body), and it is becoming quite popular for use in supplements. This is Cordyceps militaris.

Cordyceps militaris is known as Scarlet Club Fungus, or Caterpillar Killer in the U.S. It is the Cordyceps species that can grow on the largest variety of insects and can be found widely in North America and Asia (3). They are commonly found in the mountains, in bogs.

This Cordyceps variety can be commercially cultivated at scale rather easily and does not require any insects. By using Cordyceps militaris, for the first time, true Cordyceps mushroom extracts can be made.

There are two distinct advantages to the Cordyceps Militaris vs Cordyceps Sinensis:

1. No insects are harmed in the making of this mushroom – Cordyceps militaris is grown in a sterile medium, NOT in an arthropod.

2. It’s a super-charged version of Cordyceps – Cordyceps militaris produces the health-supporting compound cordycepin (3′-deoxyadenosine) in much higher amounts when compared to Cordyceps sinensis (2).

A study published in the Journal of Agricultural and Food Chemistry in 2008, confirmed that not only does Cordyceps militaris contain more cordycepin when compared with the wild Cordyceps sinensis, it has up to 90 times more (2)!

That data is very revealing, as products touting the benefits of cordycepin and labelled as Cordyceps sinensis would likely have undetectable amounts of this phyto-nutrient. This information makes the shopping decision much easier when it comes to deciding whether or buy a supplement made from Cordyceps sinensis vs militaris: Cordyceps militaris is the clear winner.

Given the exorbitant cost of Cordyceps sinensis, the majority of the supplements sold in North America will be extracts made from cultivated the Cordyceps militaris fungus.

There are important differences between Cordyceps militaris products available in North America. So, don’t go sprinting to that supplement aisle just yet to grab yourself a bottle of affordable Cordyceps! Read on below for important facts you will need to know before you go shopping for a Cordyceps extract.

To get the most health benefits from your Cordyceps supplement, you will have to make sure of three things:

1. The Cordyceps militaris supplement label specifically says that it is made from the actual mushroom (fruiting body), not the mycelium. Mycelium-based supplements will include the grain these fungal filaments are grown on and contain a lower proportion of medicinal compounds. Cordyceps mycelium on grain would have almost no cordycepin due to the low amount of mycelium present. Learn more about the significant differences between supplements made from mycelium vs fruiting body here.

2. The supplement label identifies the beta-glucan content, the key mushroom compound to getting health-supporting effects from fungi. The Real Mushrooms Cordyceps-M supplement, which is extracted exclusively from organic Cordyceps militaris mushrooms, has greater than 25% beta-glucans. Compare that to Cordyceps mycelium on grain, which typically has 1-3% beta-glucans. Since all Real Mushrooms supplements are derived from the mushroom (versus the mycelium), there are much higher levels of the important beta-glucans.

You can ensure you receive ethically-produced, pure and potent Cordyceps militaris extract if you select any of Real Mushrooms’ products. We cultivate certified organic mushrooms and use ideal mushroom extraction methods to make the best Cordyceps supplement on the market. Conveniently, we offer two ways for you to take your daily dose of Cordyceps militaris supplements: capsules, or powders.

Yes, it’s important to understand the differences between Cordyceps sinensis vs militaris to ensure you’re getting the best Cordyceps supplement. However, there’s so much more to learn about this fascinating mushroom!

Read our other articles to get to know the advantages and uses of this unique health-supporting fungus: